Out Of Sequence
Here's my wonderful talking dog again, he should have been placed
just above the monkey joke but for one reason and another
he ended up in the wrong place.
Not like him at all he has allways been incredibly 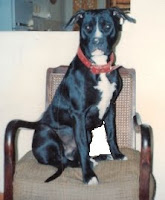 obedient.
Actually, now that I think about it, it's really the
monkey's who got into the wrong place not Benson.
The trouble is those mischievous monkey'swere so eager
to show off their joke telling prowess
they persuaded me to post them before I
had got Benson ready for his debut.
Phew that's a relief I did'nt think Benson could have made such a dumb mistake it was all me and those crazy monkey's